Vine-illy was inspired by Poison Ivy of DC Comics, sharing her powers, plant-themed appearance, and obsession with plants. Her origin is similar to that of Doctor Octopus from the Spider-Man comics. In addition, her powers is also inspired by those of Sedusa from The Powerpuff Girls series. Her name is a portmanteau of the words "vine" and "filly". It is also a pun on the word "villainy". Vine-illy was designed by User:Bleck11.

She has a light green coat and a mane of thorny dark green vines. Her eyes have two concentric pairs of irises, the outer being yellow and the inner purple.

Vine-illy used to be a plant obsessed worker at a flower shop in Manehattan until she bought an enchanted spell book in a store in Canterlot and read a growth spell from the book for the plants inside the shop, causing the plants to grow out of control and the flower shop to explode and collapse on her. Upon emerging from the rubble, the accident had fused her with the plants, turning her into a plant-pony hybrid and giving her new powers—such as controlling plants, and driven her to madness.

Soon after, Vine-illy proclaimed that she would take over Manehattan and turn every place into gardens for her beloved plants. Later, Vine-illy managed to recruit three henchponies to assist her with her plans.

Vine-illy, along with her henchponies, resides at her headquarters in Manehattan, where she plan various ways to take over the city and create gardens for her plants.

Vine-illy is arrogant, unhinged, and extremely obsessed with plants. Most of her plans involve turning various places into gardens for her plants, even if it means harming others. She also thinks very little of her enemies and rarely takes them seriously.

After her accident at the flower shop, Vine-illy gained a thorny vine-like prehensile and stretchable mane. She can increase the size of her thorns or shoot them from her mane. She is also able to control and manipulate plants within her surroundings.

Vine-illy's henchponies are shown to be very loyal to her and obey her commands.

Prior to her accident, Vine-illy discovered Wormking while on a trip to the edge of Equestria and adopted him as her pet. Since then, they are shown to have a close bond together.

Vine-illy is shown to have a rivalry with Claire, as they competes to prove which one of them is the best. 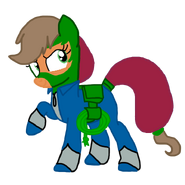 Old design of Vine-illy.
Add a photo to this gallery
Retrieved from "https://bronies.fandom.com/wiki/Vine-illy?oldid=185041"
Community content is available under CC-BY-SA unless otherwise noted.