Yellowstar has a bright yellow mane styled like Carrot Top's and a white coat. She has two roses on the side of her mane and a white collar with a ruby on the front. Her eyes are red and her cutie mark is a set of three yellow stars.

Same as above, except her mane is combed to the sides.

Yellowstar is suspected (although it has been confirmed as much by Mast88 himself) to be the previously unknown seventh Element of Harmony, the element of Solidarity, discovered by Twilight after the defeat of Nightmare Moon. She moved to Ponyville at the same time as Twilight discovered the existence of the seventh Element.

Yellowstar's special talent is helping other ponies. She is always willing to lend a helping hoof to a pony in need. She is very eager to make friends. 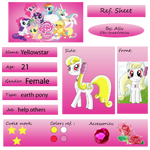 Yellowstar in her Wonderbolts costume, fanart by Topshot

Alternative Gala dress, fanart by Sponsz
Add a photo to this gallery

Retrieved from "https://bronies.fandom.com/wiki/Yellowstar?oldid=12759"
Community content is available under CC-BY-SA unless otherwise noted.